During the last months I have been working on a QOL improvement for Gaia Sky video production. Currently, Gaia Sky offers a couple of ways to persist and reproduce camera behaviours: scripting and camera paths.

Scripting offers a high level API which allows for the interaction and manipulation of the internal state. Conceptually, a running script is no different from a regular user. A script runs in its own thread and, like a user, interacts with Gaia Sky's core through the event manager, a message-passing entity which encapsulates the core functionality.

Camera paths are very different from scripting in which they are integrated into the core and run synchronously with the main loop. Camera paths can be recorded at a given frame rate, producing a file which contains a series of camera states [position, orientation, time] and that can be played later on. Right now, the only way to record camera paths is by clicking on the record button in the GUI and directly interacting with the program with the keyboard+mouse or a gamepad to produced the desired behaviour in real time. This brings us to the new keyframe-based system.

In the next version, Gaia Sky will get a brand new keyframe-based camera path mode. This mode enables the interactive definition of camera paths in the scene space. Basically, the user defines a set of locations, or keyframes, which must be hit by the camera at a certain time. Each keyframe contains the position and orientation of the camera, in addition to the simulation timestamp and time delay. Keyframes can be saved to keyframe files .gkf, which can later be loaded directly from the keyframes mode UI, and exported to regular Gaia Sky camera path files .gsc to be played back. 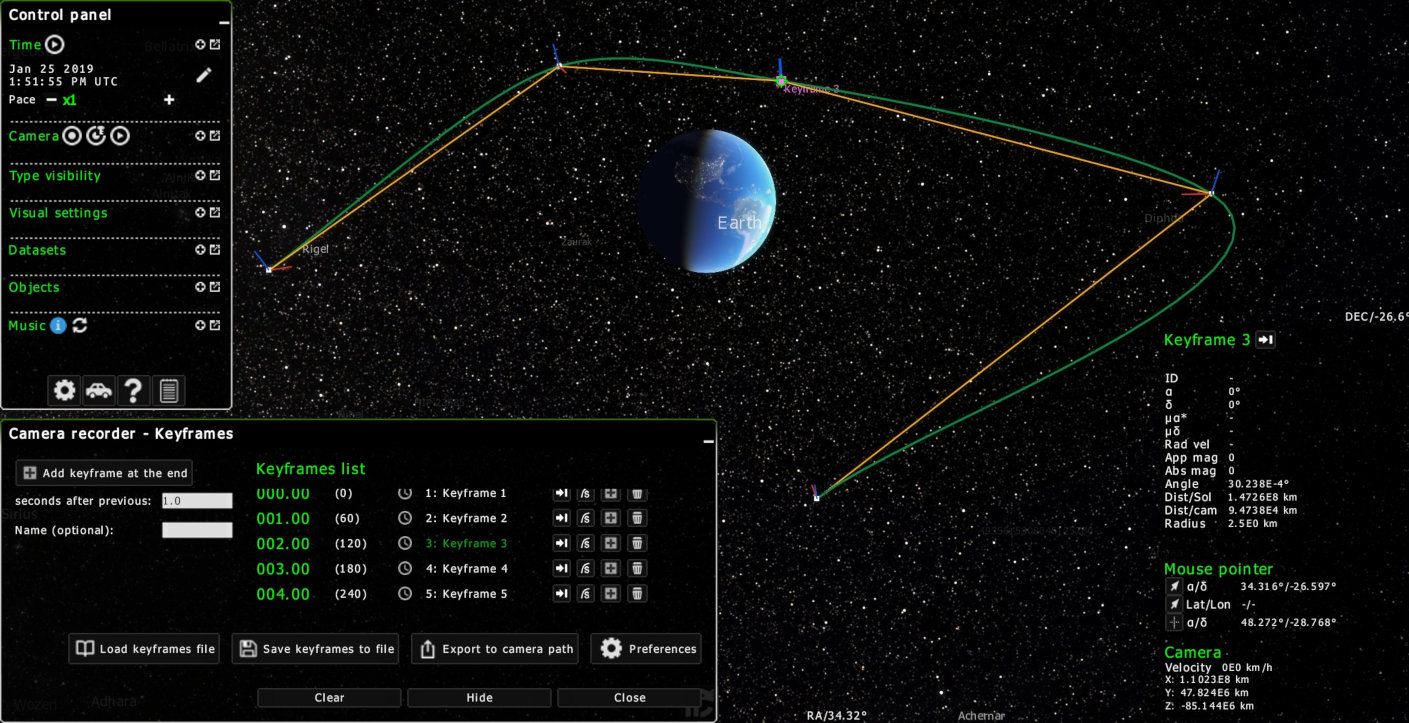 The conversion from keyframes to camera path is done using either linear interpolation or Catmull-Rom splines (depending on the configuration settings). In the latter case, keyframes can be set to act as seams. Seam keyframes effectively break the path into two. In spline mode, this allows us to define subpaths and avoid spline overshooting.

About the user interface, we put some effort into making sure the addition and edition of keyframes is easy from either the GUI or the 3D scene space itself. Individual keyframes are focusable (right click) and dragged around in the scene 3D space. Whenever a keyframe is in focus, the camera can rotate around it a zoom in/out as if it were any other scene object. Also, the orientation of every keyframe can be rotated around the direction vector (hold CTRL and drag mouse right), the up vector (hold SHIFT and drag mouse right), and around cross(direction, up) (hold ALT while dragging mouse right).

Below is an early video of the state as of a month ago:


Obviously, this still need some work and polish, but It has the potential to be a much nicer and convenient way to define camera paths in certain situations. A couple of problems to be addressed come to mind:

All in all, I will release the next version of Gaia Sky with the keyframe camera recorder active and see if I get some feedback from users. Maybe nobody ever uses the system and it's pointless to improve it further, who knows.